On Mother’s Day, we celebrate and honour the mother of the family. This practice is in line with the traditional ethics held for millennia by the Chinese people, i.e. respect for the elderly and filial piety towards parents. In traditional Chinese decorative arts, lily flowers symbolise motherhood and maternal bonds with children and they figure prominently on articles created for mothers, expecting or being a birthday girl. 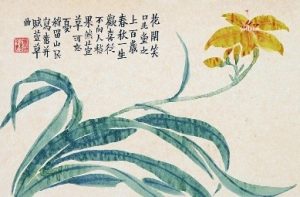 In traditional Chinese compounds, there are quarters allocated for the Lady of the House, known as the ‘North Hall’ because of its orientation. There is the practice of planting lily bulbus in the courtyard outside the North Hall when the son leaves home on a journey so that the lily flowers will comfort his mother and console her sadness while he is away.

Lily flowers and butterflies form a pun rebus picture known as ‘Xuan Die Tu 萱蝶图’, meaning ‘May mother live up to a ripe old age’. ‘Xuan 萱’ comes from ‘xuan cao 萱草’，the Chinese name for ‘lily’ and‘die 耋’ , the Chinese character for ‘octogenarian’, is a pun on  ‘die 蝶’ for ‘butterfly’. It is obviously an apt theme for birthday present with a heartfelt wish.

The findings and opinions in this article are written by Dr Yibin Ni.