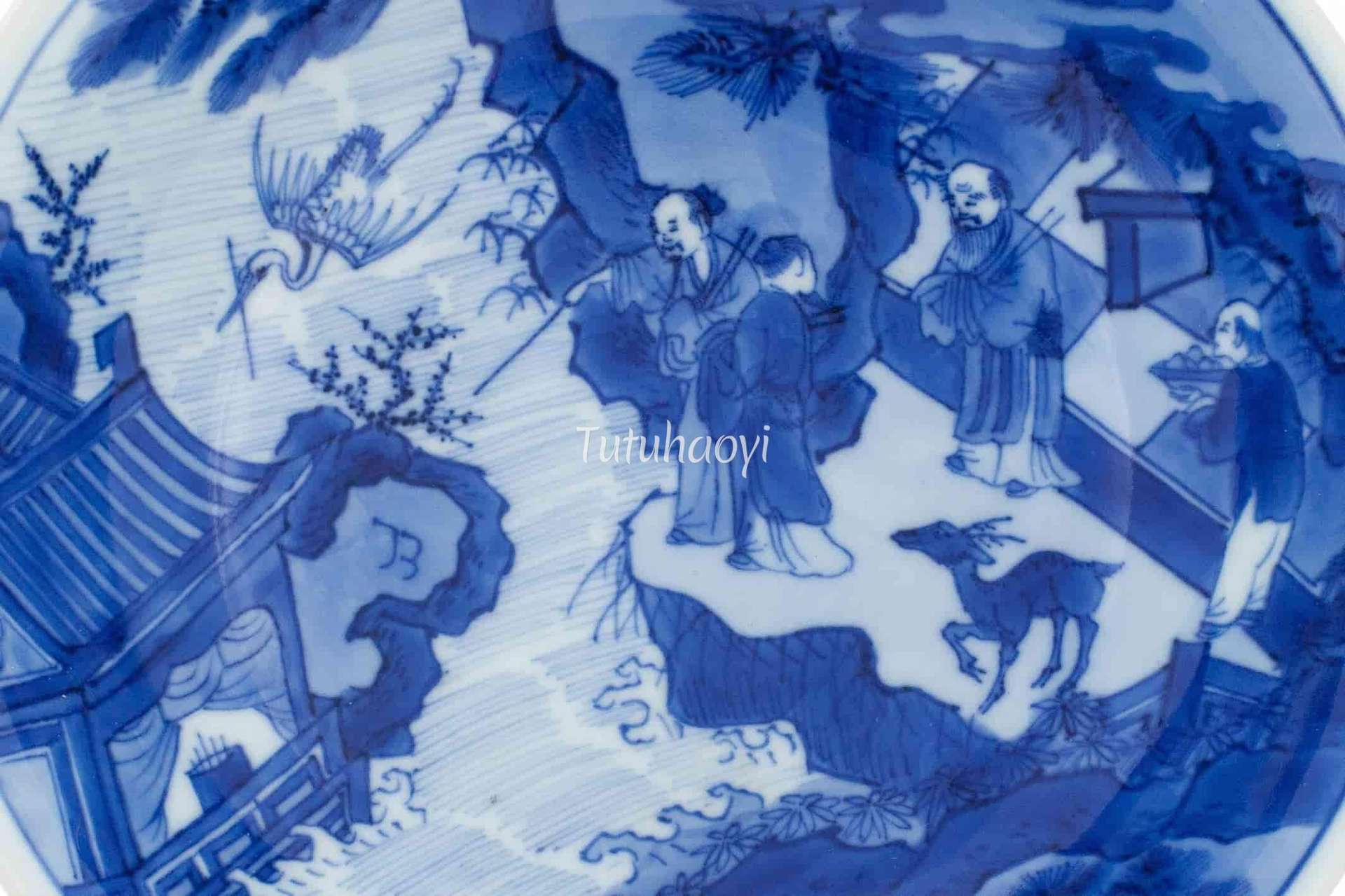 More than a simple assemblage of individual symbols of longevity: Discussion on a Chinese pictorial narrative scene of ‘Hai Wu Tian Chou’

More often than not, traditional Chinese motifs or symbols are not receiving their deserved attention, being given simplistic or inadequate labels and inaccurate explanations in our museums, catalogues, or even scholarly writing. The treatment of many pictorial representations of the thousand-year-old literary anecdote ‘A bamboo counter is being added to the house in the sea (海屋添筹 hai wu tian chou)’ is a case in point. Appreciation of Chinese visual art: depiction of Laozi, the personification of Dao (Tao) on a buffalo’s back

Have you ever wondered why images of an old scholarly man riding a buffalo are often depicted on Chinese antiques? What is so special about this man who looks highly respected and followed by yet still sitting on a buffalo’s back? We hereby invite art historian Dr Yibin Ni to solve the mystery… 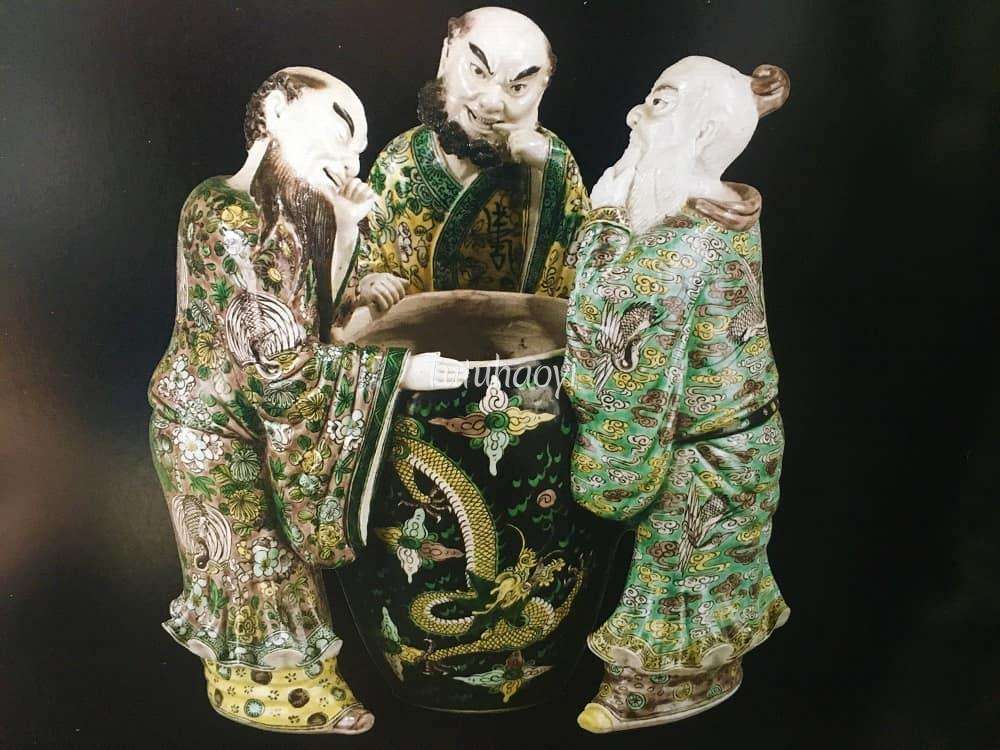 Are the three men really tasting wine: a common misunderstanding of a story scene

There have been a few interesting discussions even guesses on a mysterious scene which depicts mainly three figures surrounding a large bowl. The story scene actually comes from an important anecdote in Song dynasty in China. Let Dr Yibin Ni explain to you with fascinating details. As a young man, Lv Dongbin (吕洞宾, or Lü Dongbin) passed several rounds of civil-service examinations and was twice appointed as a county magistrate. After being bored with officialdom, he went to become a recluse in the mountains. Not until he met Zhongli Quan (钟离权, or 汉钟离 Han Zhongli) in a tavern in Chang’an, did he learn the true way of the Dao from him and became an immortal. After Zhongli Quan tested him with Ten Trials, or inspired him with a dream, the teacher passed the pupil the method of concocting the Golden Pill (授以金丹之道). Both of them are famous patron saints of the Daoist discipline of neidan (内丹) or Inner Alchemy. Instead of resorting to outside substances such as minerals, the neidan adepts making the elixir within the body.

Lv Dongbin is the most colourful and popular figure amongst the Eight Daoist Immortals with many legends, plays, and pictures created for him. His prototypical portrayal is a scholar figure with a signature headdress variously named ‘chunyang jin (纯阳巾)’ or ‘huayang jin (华阳巾)’, i.e., ‘pure-yang turban’.  His attribute is a practically invincible sword and sometimes a horse-hair fly whisk. He often has an acolyte accompanying him, with a miniature tree growing out of the top of his head because he was the willow spirit. Zhongli Quan (钟离权, or 汉钟离 Han Zhongli) is regarded as the most eminent among the Daoist Eight Immortals. Respected as ‘Zhengyang Zushi (正阳祖师)’ or the ‘Grand Master with Pure Yang Energy’, he is one of the founders of the northern school of the Complete Realisation (Quanzhen jiao 全真教) Sect of Daoism. He is prototypically depicted as a stout figure with a bare chest and pot belly and a unique hairstyle: ox-horn double buns. His established emblem is a fan, as is used in the decorative set of the Covet Eight Immortals (暗八仙 an ba xian), but sometimes he holds a peach or a gourd. Liexian Quanzhuan (列仙全传) or The Complete Biographies of the Notable Immortals, compiled by the Ming Wang Shizhen (王世贞 1526-1590), has Zhongli Quan’s biographical information. May the length of your life be eternally prolonged!

In this scene, there are several Chinese longevity symbols such as the crane, the generic immortal, the pine tree, and the deer, etc. However, the proper meaning of this particular scene is not a simple assemblage of individual symbols. It is a snapshot of a coherent narrative that has been well-loved and widely consumed in the visual oeuvre that represents the Chinese longevity ideal.

The literary origin of the scene can be traced back to an anecdote collected in Notes by Dongpo (东坡志林), compiled by a prominent man of letters of the Song dynasty, Su Shi (苏轼, 1037-1101). During one chance meeting of three geriatric men, the topic of age was broached. Each one of them tried their best to exaggerate his own great age. The second speaker famously boasted, ‘After every cycle of the sea drying up and becoming mulberry fields, I put a strip of bamboo in my house as a counter and now the strips have already filled ten of the rooms.’ Later, this dramatic detail evolved into a classic allusion to longevity, a popular dream cherished by all people in China. Pictorial representations of this dramatic moment were invented and elaborated into different versions to adorn birthday presents of all kinds.

Initially, the title of the scene is, literally: ‘A bamboo counter is being added to the house in the sea (海屋添筹 hai wu tian chou)’. The first two characters of the phrase resulted from compressing the paragraph spoken by the second speaker in the story into an abbreviation consisting of the first and the last characters 海屋 hai wu (‘海水变桑田时, 吾辄下一筹, 尔来吾筹已满十间屋’). The coined two-character phrase ‘海屋 hai wu’ now means a ‘pavilion at sea’, serving as the first two characters in the set phrase. The rest two characters of the phrase ‘添筹 tianchou’ denotes the action (of a crane) adding a bamboo strip as a counter’. Thus, the four-character phrase alludes to the second speaker’s words in the original story.

During the Qing dynasty (1644-1911), pun rebus designs became more and more popular in folk decorative arts. The last character of the phrase ‘筹 chou’ for ‘bamboo strip counter’, acquired a pun on ‘寿 shou’, the Chinese character for ‘longevity’. Then, the phrase virtually conveys the meaning of a birthday wish: ‘May the length of your life be eternally prolonged (海屋添寿 hai wu tian shou)’. One of the earliest mentions of this pun phrase in literature can be found in Section 22 in the second part of the book Tao Ya (匋雅), or ‘Notes of Chinese Best Pottery and Porcelain’, compiled by Chen Liu (陈浏) and published in 1910.

This research article is written by Dr Yibin Ni. Laozi (Lao Tzu 老子) is a great ancient Chinese thinker, to whom a five-thousand-character book ‘Dao de jing 道德经’, or The Scripture of the Way and Virtue, has been attributed. He is regarded as the founder of philosophical Daoism (Taoism), daojia 道家, because of his profound insights to life and the world, and a supreme deity in religious Daoism (Taoism), daojiao 道教, and popular Chinese religious cults.

Legend goes that Laozi grew unhappy about the moral decay and decline of the society and decided to leave for the unsettled frontier in the west. A noble lie says that Yinxi (尹喜), the official in charge of Han’gu Pass (函谷关) on the border saw some purple clouds flying towards his direction, and then euphorically expected and welcomed the renowned master’s arrival. Yinxi managed to persuade the master to write down his wisdom before he began his new life as a hermit. The brief pamphlet, also named after its author as ‘Laozi’, enjoyed a long-lasting appeal, resulting in more than seven hundred commentaries devoted to it by men of letters throughout the long history of China.

See more images of Laozi on the signature buffalo here and discussion about pictorial parody of Laozi riding an ox in this blog.