When you mistake a motif in a traditional Chinese picture, you could have misinterpreted the meaning of the whole image intended by the ancient craftsman. Dr Yibin Ni has used the following example to illustrate the hidden meaning of a series of images in the context of Chinese pun rebus culture. 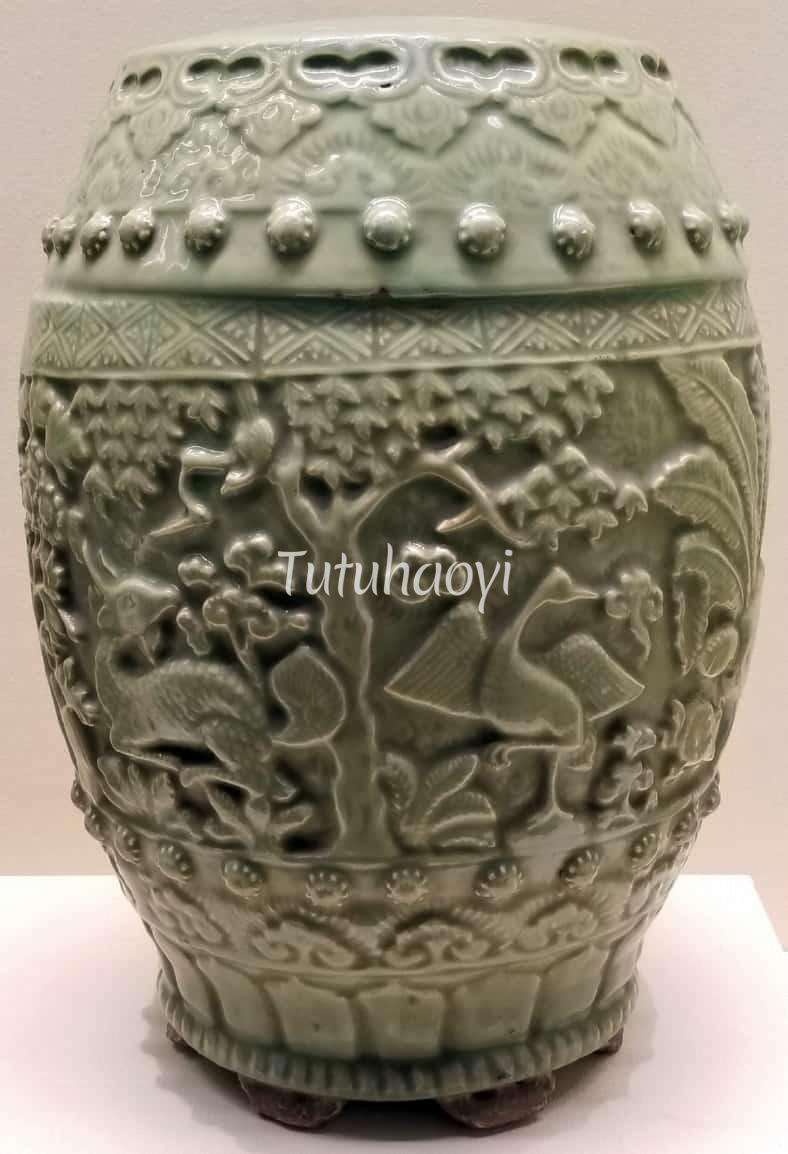 May the whole universe prosper in eternal spring

Yang Shen (杨慎, 1488-1559), alias Sheng’an (升庵), is a literatus and poet in the Ming dynasty (1368-1644). He recorded in Volume Ninety-Four of Sheng’an Additional Works a folklore anecdote: ‘In the northern dialect, there is no difference in sound between the he 合 for “coming together” and the he 鹤 for “crane”. There are people who painted six cranes and a Chinese cedar tree to form a pun rebus design meaning “liu he tong chun (六合同春), i.e. May the whole universe prosper in eternal spring”.’ (杨慎《升庵外集》卷九十四:“北之语合鹤迥然不分，故有绘六鹤及椿树为图者，取六合同春之义”. ) The Chinese phrase ‘liu he 六鹤’ for ‘six cranes’ puns on the phrase ‘liu he 六合’ for ‘six directions’, i.e., heaven, earth, north, south, east, and west, namely, ‘the universe’. The Chinese cedar or mahogany tree, i.e., toona sinensis, is called ‘chun 椿’ tree in Chinese and is used as a pun on ‘chun 春’ for ‘the spring season’.

Unfortunately, there are no examples of this ingenious ancient design passed down. However, there is a related pun rebus design extant on ancient porcelain and other handcrafted art works. This design consists of three key elements: deer, crane, and the wu tong 梧桐 tree, or Chinese parasol tree. In some Chinese dialects, the combination of the Chinese characters ‘lu 鹿’ and ‘he 鹤’ for ‘deer and crane’ makes a pun on ‘liu he 六合’ for ‘six directions’ or ‘the universe’. The image of the wu tong 梧桐 tree, or Chinese parasol tree in the design cues the concept of ‘tong chun 同春’, meaning ‘sharing the spring season’. The pun rebus design appears as early as in the Ming dynasty on a Longquan celadon garden seat. As a culturally cherished picture, it also appears on a porcelain bottle vase and a table screen both crafted in the Qing dynasty (1644-1911).

The diligent Japanese scholar Nozaki Nobuchika 野崎诚近 collected this design in his pioneering volume on Chinese pun rebus pictures 吉祥図案解題: 支那風俗の一研究. His illustration clearly shows the three key elements that form the pun rebus. However, in the title of this picture, he literally put down Chinese characters ‘lu 鹿’ for ‘deer’ and ‘he 鹤’ for ‘crane’, instead of the concept ‘liu he 六合’ for ‘six directions’ or ‘the universe’, to which the two creatures were meant to refer.

Luckily enough, a related Qing-dynasty New Year print with both a deer and a crane on it is still in existence. On top of the picture, the Chinese phrase “liu he tong chun (六合同春), i.e. May the whole universe prosper in eternal spring” is printed verbatim. Although the careless print maker failed to include the wu tong 梧桐 tree, or Chinese parasol tree, in the design, it is evident that this was a popular auspicious theme in traditional China. The earliest pictograph of the character 鹿 lu for ‘deer’ is found on a tortoise plastron burnt to crack for divination. Though it is by no means anatomically accurate, the pictograph exhibits the most clearly recognisable characteristics of the animal. It vividly imitates the four legs, slender head, lean body, and prominent antlers. Different scripts of the same word show how the antlers and legs have been evolving to the modern-day character.

The Piya (埤雅), a Chinese dictionary compiled by the Song-Dynasty scholar Lu Dian (陆佃, 1042-1102) with a preface dated 1125 contains a quotation which says ‘The ancients regarded deer as divine animals’. They were reputed to be able to live for a very long time and, hence, like cranes and tortoises, they are symbols of longevity. Deer usually appears as a companion of the Star God of Longevity (寿星, shouxing), who is an old man with a long white beard and a bulging forehead. For this reason, their velvet antlers are a highly valued ingredient in many preparations of traditional Chinese medicine, and are reported to have the power to prolong life, aid virility and alleviate various ailments.

Deer came to represent wealth because the Chinese word 鹿 lu for ‘deer’ is a homophone of 禄 lu for ‘official income’ or ‘emolument’. A blue and white dish painted with a deer bears a four-character inscription which says ‘禄在其中 (Here is your official emoluments)’, explicitly link the deer to emoluments. A gift of an image showing a servant presenting a deer on a tray is a way of wishing the recipient advancement in officialdom and a rise in his pay.

May you have an ample official income 百禄 This pun rebus picture consists of four essential pictorial elements: bird, deer, bee, and monkey. The word ‘que 雀’ for ‘small bird’ in Chinese puns on the word ‘jue 爵’ for ‘high official rank’ or ‘peerage’. The word ‘lu 鹿’ for ‘deer’ shares the same sound with ‘lu 禄’ for ‘emolument’ or ‘salary’. The word ‘feng 蜂’ for ‘bee’, is a pun on ‘feng 封’ for the verb ‘to be granted’ and the word ‘hou 猴’ for ‘monkey’ is a pun on ‘hou 侯’ for ‘marquis’, which represents high ranks in the government in general. Thus, the juxtaposition of the four elements is used to convey the auspicious message of ‘May you be created a peer and earn a handsome official income’.

Curios bearing such motifs have been used as treasured gifts passing among friends and colleagues to lubricate the social machinery.

May you get promoted 加官

May you be bestowed the title of a marquis presently 马上封侯 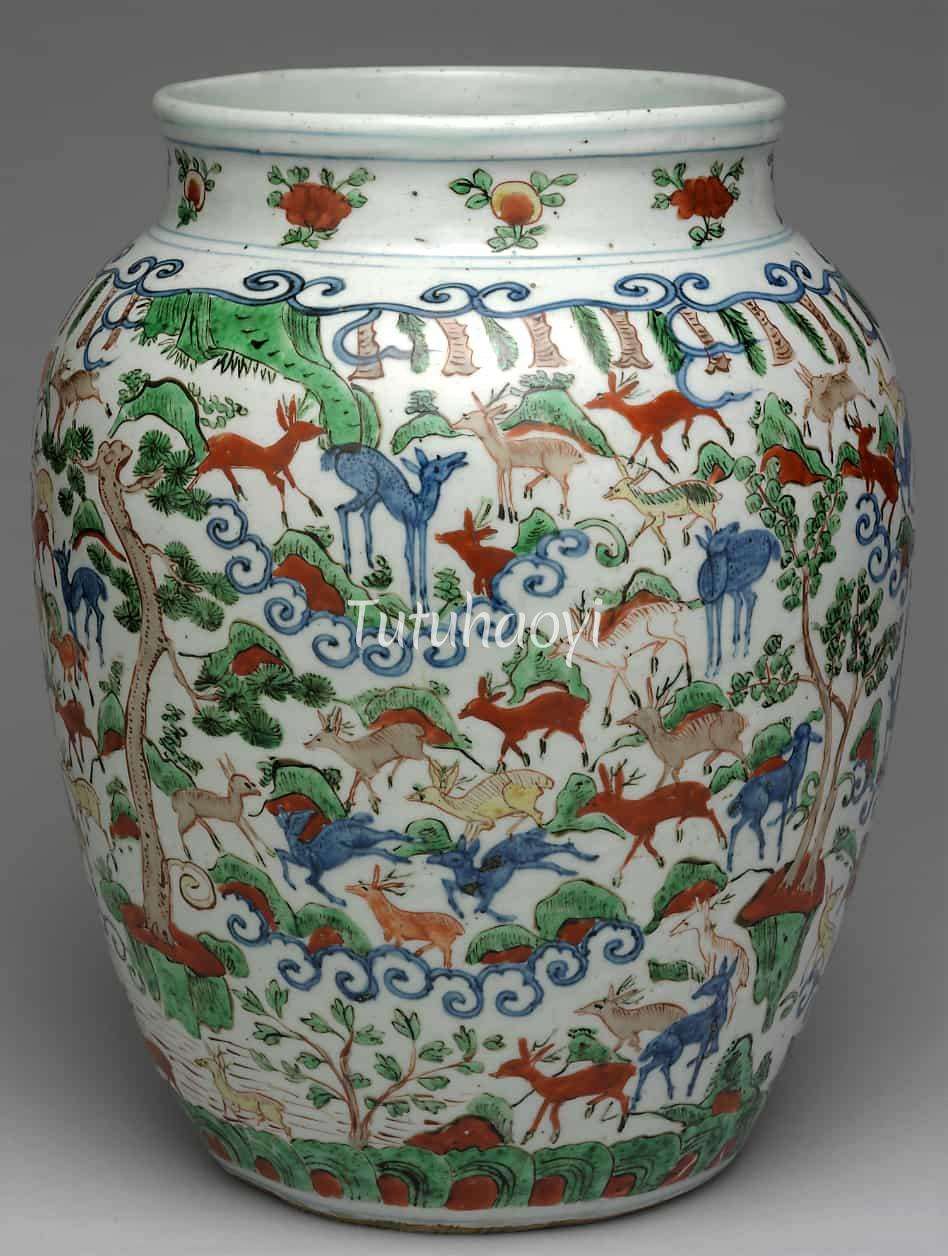 May you have an ample official income

Just like the English word ‘bat’ can mean ‘a kind of animal’ in one context and ‘a club for playing tennis’ in another, so can pictures of animals and flowers in a pictorial design called ‘pun rebus’ in Chinese art. For example, the Chinese name for deer is lu 鹿, which is a pun on lu 禄 ‘emolument’ or ‘official income’. A pun rebus design known as bai lu 百禄 adorns a Ming wucai (five-coloured) jar and Qing fencai (famille rose) jars here. The design consists of, ideally, one hundred deer, and conveys the message ‘May you have an ample official income’! Not a bad idea as a present for a friend or relative who works in civil service.