On the seventh day of the seventh month of the lunar Chinese year, young men and women will celebrate their traditional ‘Valentine’s Day’, Qixi Festival (七夕节). The custom can be traced back to an ancient story. The Weaving Maiden and the Herd Boy

The seventh day of the seventh month of the traditional Chinese year is the Chinese ‘Valentine’s Day’, Qixi Festival (七夕节). The custom can be traced back to an ancient story about a weaver girl and a cowherd:

More discussion on this topic is available in Dr Yibin Ni’s blog here. The Ming-dynasty play The Story of the Blue Robe (青袍记 Qingpao ji, also called《梁氏父子传胪记》) tells the story of how Lv Dongbin (吕洞宾 Lü Dongbin or 吕纯阳), one of the Eight Daoist Immortals (八仙 baxian), survived a catastrophe with the help of Liang Hao 梁灏 and repaid him by ensuring him to be able to enjoy the highest academic title, longevity, and a flourishing extended family.

A scholar named Liang Hao in Song dynasty was the human form taken by the God of Literacy when he was disgraced to be sent to the human world. Once the Thunder God and Lightning Goddess were ordered to cleanse the earth with seven days of thunderstorm. This was the ordeal which Lv Dongbin, Liu Hai 刘海, Iron-Crutch Li 铁拐李, Han Shan 寒山, and Shi De 拾得 were all predestined to go through. Liang Hao helped Lv Dongbin by letting him hide in his fingernail as a grain. After Lv Dongbin survived the disaster, he decided to repay Liang Hao by leaving him with his good wishes for a successful career, longevity, and many successful descendants.

The next day, Liang Hao invited his three friends over and dined and wined them on a boat. Towards the evening, two of the friends said that they heard that there was a spirit in the Pavilion of Looking at Immortals (望仙楼) and whoever spent a night there would come under its spell. They dared Liang Hao to spend the night there for a reward of a tael of silver. Liang Hao took up the challenge and stayed in the pavilion reading by a lamp. Lv Dongbin thought that this was an opportunity and mobilised a willow-tree spirit (柳树精 liushu jing) to carry a girl to Liang to be his future wife. Since the girl was taken from her bed and arrived naked, Liang Hao had to wrap her in his blue robe, hence the title of the play. Liang Hao sent the girl to spend the night with his mother and the following day the girl’s parents were informed of the event and happily married their daughter to Liang Hao. 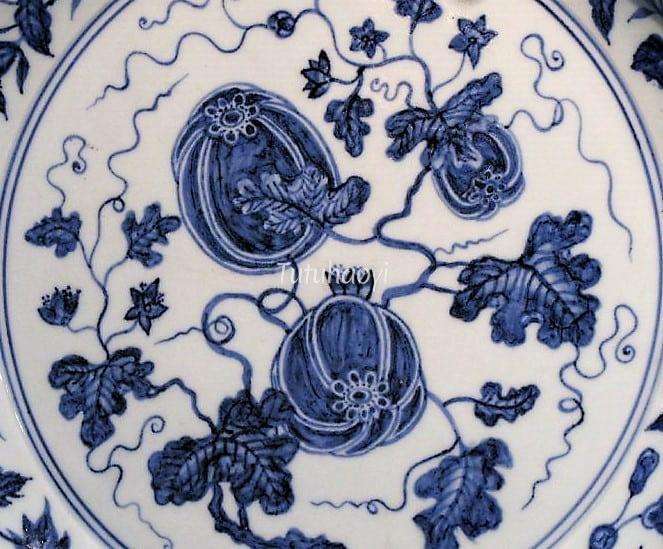 The phrase ‘gua die mian mian 瓜瓞绵绵’ is a variation of a line from the poem Mian 绵 collected in the section of the Greater Odes of the Kingdom (Daya 大雅) in the Classic of Poetry (Shijing 诗经). It is used as a metaphor for the continuation and flourishing of the family or clan along the male line. The Chinese character ‘gua 瓜’ refers to mature ‘melon’, ‘squash’, ‘gourd’, ‘pumpkin’, ‘cantaloupe’ and the like and the character ‘die 瓞’ to their young ones. The Shijing anthology was the oldest collection of songs and ballads existing in China, compiled during the period between the 11th to 7th centuries BCE. Metaphors, set phrases, and allusions from the anthology are rich sources for Chinese literary and pictorial culture over the millennia. Derived from the classic text, pictorial depictions of melons with spreading vines became a popular subject to wish the family prosperity of the patron.

The group of pictures displayed here have the same good wish as in pun pictures ‘May the male line in your family clan continue and flourish’, and yet they are academically different. The pictures here are ‘pictorial allusion’, rather than pun rebus pictures because they use pure pictorial descriptions to allude to a classic literary saying. There is no butterfly 蝶 in the images and therefore there is no pun for dié 瓞. The phrase ‘gua die mian mian 瓜瓞绵绵’ is a variation of a line from a poem in the Classic of Poetry, Shijing 诗经, compiled in China during the period between the 11th to 7th centuries BCE, used as a metaphor for the continuation and flourishing of the family or clan along the male line. The Chinese character ‘gua 瓜’ refers to mature ‘melon’, ‘squash’, ‘gourd’, ‘pumpkin’, ‘cantaloupe’ and the like and the character ‘dié 瓞’ to their young ones. Derived from the classic text, pictorial depictions of melons with spreading vines became a popular subject to wish the family prosperity of the patron. Later, in order to liven the composition, butterflies were added because the character ‘dié 蝶’ for ‘butterfly’ or possibly ‘moth’ makes a pun on ‘dié 瓞’ for ‘small melons’ in the original phrase.

Related motif on the same topic:

Note: this pun picture is to be differentiated from a pictorial allusion May the male line in your family clan continue and flourish in Motifs & Symbols section. May your jade palatial home be honoured and full of riches

The character ‘yu 玉’ in ‘yulan hua 玉兰花’ for ‘magnolia’ is the same ‘yu 玉’ for ‘jade’. The word ‘tang 棠’ from ‘haitang hua 海棠花’ for ‘crab apple’ is homophonic with the word ‘tang 堂’ for ‘house’. The combination of the two characters ‘yutang 玉堂’ means ‘jade house’ with connotations of being grand and palatial.

The peony flower, known in Chinese as ‘mudan hua 牡丹花’, has a nickname of ‘fugui hua 富贵花’, literally, the ‘flower of wealth and prestige’.

Therefore, a composition of blooms of magnolia, crab apple, and peony can be used to convey the auspicious wish of ‘May your jade palatial home be honoured and full of riches!’ 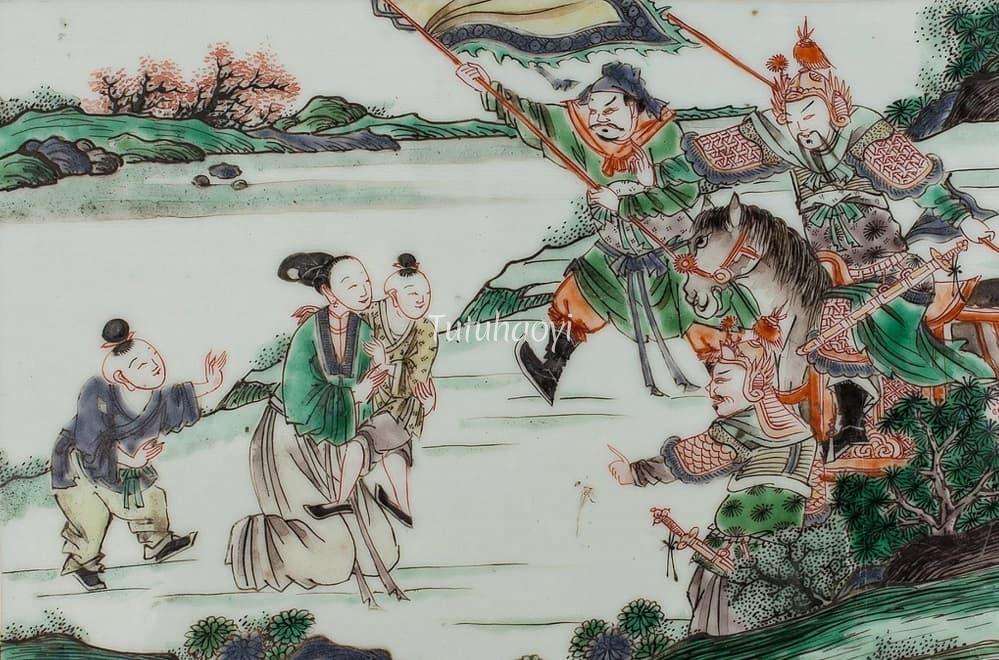 Grapes grow in clusters of up to 300 berries each and thus produce an enormous number of seeds. This property was regarded by the ancient Chinese as an apt allusion to their wish for a large number of offspring. That is why grapes are seen adorning various kinds of Chinese antiques, handcrafts, and bric-a-brac, often, together with squirrels, which are known for their amazing ability to multiply, and the two together form a make-belief scene of animal eating habit.

‘Dié 蝶’ from hú dié 蝴蝶, the Chinese character for ‘butterfly’, can be used to pun on ‘dié 耋’, meaning ‘octogenarian’ in the phrase ‘May mother live up to a ripe old age 萱耋’, or ‘dié 瓞’ for ‘small melons’ in the phrase ‘May the male line in your family clan continue and flourish 瓜瓞绵绵’.