Consummation of Love from Western Chamber Romance of the Western Chamber (西厢记 Xixiang ji) is the most popular love comedy in late imperial China. In the story, Scholar Zhang (张生 Zhang Junrui) falls in love with a beautiful lady named Cui Yingying (崔莺莺), who happens to be stranded in a monastery with her widowed mother and, after plenty of twists and turns, the young couple consummate their love under the nose of Yingying’s mother without her approval.

There is a popular motif on early Qing porcelain which vividly depicts a scene in the Act ‘Consummation of Love’ of the play Romance of the Western Chamber. Eventually, Scholar Zhang has persuaded the lady he has been courting to come to his quarters. Zhang is holding a candle in one hand to light the way with his left arm around Lady Yingying’s shoulders. He is almost dragging the shy lady towards the doorway with the candle noticeably tilting forward. Ahead of them, Yingying’s maid Hongniang (红娘) leads the way. She is carrying a folded duvet under her arms in case Scholar Zhang’s quilts were too shabby for the occasion, while she cannot help turning her head back, stealing glances at this thrilling human drama rare in her mundane life.

Motifs evolve during their use and spread. When the same image is adopted on an enamelled dish made in late Kangxi period, the maid Hongniang is abbreviated and the couple look much more relaxed, seemingly enjoying each other’s company. Zhang’s arm remains around Yingying’s shoulders and his hand that holds the candle stick is much surer and steadier. The couple are not moving towards a concrete door of Zhang’s bedroom, as they do in the two earlier examples. Instead, a dubious curved bridge or a planked passageway appeared behind them. It no longer serves a narrative function to indicate the locale of the event but only satisfies decorative needs in the graphic composition.

Other stories from Romance of the Western Chamber:

I have one and love it because of the scene, thanks for posting. 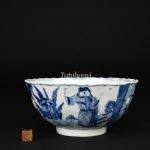