How did Guo Ziyi deter the colossal enemy army without fighting? 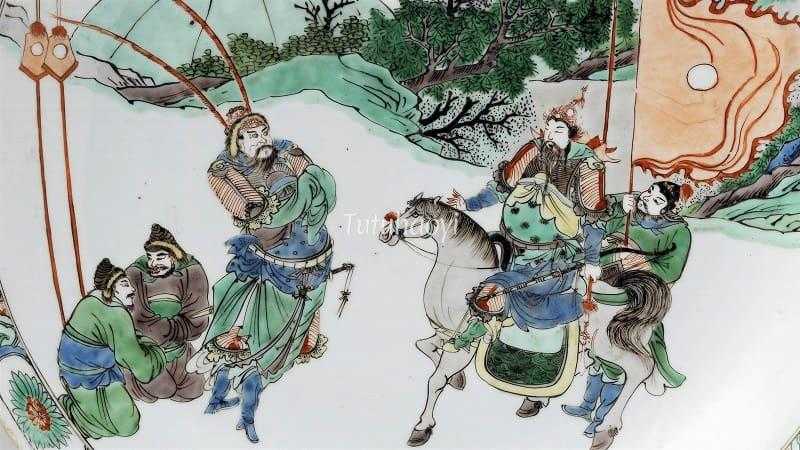 Editor: General Guo Ziyi deterring the mighty enemy has been a famous event in ancient China around mid-8th century. Deciphering this story scene on Chinese porcelain plates and tiles, however, has not been straightforward and has taken iconography specialists decades to decode. Congratulations to Dr Yibin Ni who is the first scholar who identified this image on Chinese porcelain. Here is what Dr Ni has to say about this legendary story.

Guo Ziyi (郭子仪 697–781), posthumously bestowed the title Prince Zhongwu of Fenyang (汾阳忠武王) because of his birth place and his contribution to the court, was the greatest Tang-dynasty general. He played the key role in military campaigns against the Uyghur Khaganate and Tibetan Empire, enemies constantly threatening China from the north-west. After Guo Ziyi and his army successfully stabilised the frontier for years, the rumour about the death of the elderly hero disquieted the enemy around the year 765. The Turfan and the Uyghur tribes joined together, trying to invade the Central Plains (中原). The veteran Guo Ziyi had to be summoned again by the court to deal with the tough situation. What’s worse, he was given only a small army of ten thousand soldiers to confront a combined force of three hundred thousand.

Under the circumstances, Guo Ziyi staged a genius scene. He believed that utter sincerity could move even gods, let alone the Turfan and the Uyghur tribes. General Guo asked his lieutenants and army to stay put. Then, with this conviction and his unmatched valour, he went to the camp of the mighty enemy with only a small entourage. When the tribal chieftains saw the legendary general Guo in person, appearing without his armours on, they were all awed with deep respect. They dismounted and disarmed themselves, kowtowing to him, saying, ‘It is really you, our father (果吾父也)!’

The earliest extant image of this intriguing story was painted by the Northern Song artist Li Gonglin (李公麟, 1049–1106). It is a handscroll entitled ‘General Guo Ziyi Receiving the Uyghurs Without Armours’. Later, the theme became more and more popular, being adopted by artists working with various media. Guo Ziyi’s famed single-handed repulsion of the colossal enemy army is typically portrayed as Guo Ziyi facing some kowtowing generals in exotic headdress with some laid-down arms beside them.

The portrayal of General Guo Ziyi in this scene should be in a civilian’s clothes, as is depicted in Li Gonglin’s handscroll, on some porcelain tiles, in a Qing hanging scroll, and on a carved brush holder. However, Guo’s military fame may have been too influential that some of the artists could not help but portray him in military armour, which actually misses the point of the story!

Many thanks to Professor Christiaan Jörg who has adopted my research result of an image on a Kangxi dish in his book ‘Famille Verte: Chinese Porcelain in Green Enamels’ published in 2011 (see below). His earlier book ‘Chinese Ceramics in the Collection of the Rijksmuseum, Amsterdam’ (1997) has not yet identified the figures and story scene depicted on this plate.

A blue-and-white beaker vase in the collection of Ashmolean Museum, Oxford bears the same story scene. However, it only has ‘…with warriors in a landscape’ as its description at the moment.