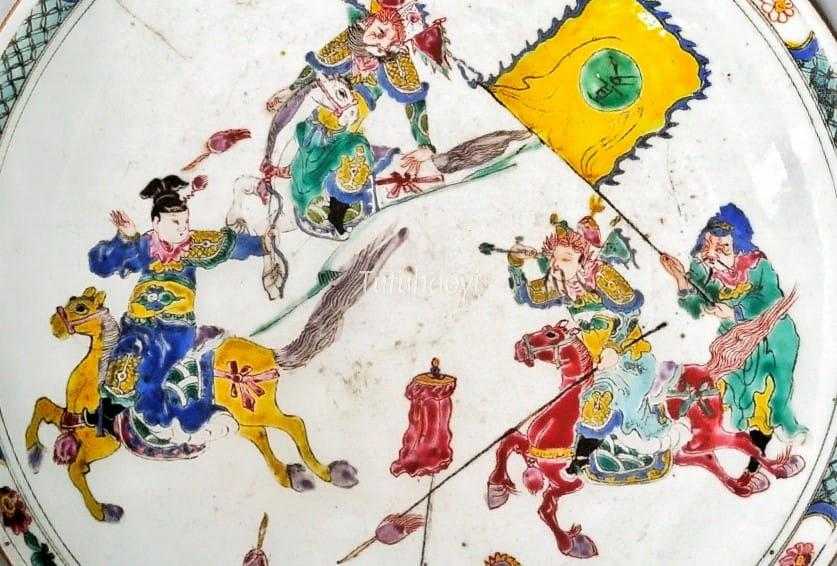 Xiahou Dun, a heroic soldier in ancient China, was famous for his one-eyed appearance. Let’s appreciate how Dr Yibin Ni analyses the artistic presentations of this character on Chinese antique porcelain, woodblock print and other art forms, in association with comparable figures in Western culture.

Xiahou Dun (夏侯惇, died 13 June 220) was one of Cao Cao’s (曹操, 155-220) most valued generals in the late Eastern Han dynasty (东汉, 25-220) of China. Cao Cao was the grand chancellor in court and grew into a powerful warlord ruling most part of Northern China. Cao Cao treated Xiahou as family and Xiahou remained his loyal lieutenant till his last day. Xiahou showed his strong temperament even when he was in his early teens. Once his mentor was insulted, and he went straight to the insulter and killed him. During the 190s in a military campaign against the famous fighter Lv Bu (Lü Bu 吕布, died 199), an arrow hit one of Xiahou’s eyeballs. He showed his valour by yanking the arrow out of his eye socket and ate his own eyeball as an act of filial piety because of the cherished belief that any part of the body was a gift from parents and should not be thrown away. From then on, Xiahou was known as ‘One-eyed Xiahou’, as is the case of the name of the legendary Roman hero, Horatius Cocles, who lost an eye in the famous Battle of the Sublician Bridge on the Tiber River and whose nickname ‘Cocles’ means ‘one-eyed’.

A Qing-dynasty enamelled dish has this intensely dramatic scene as its decorative theme. The porcelain painter chose the climactic moment with Xiahou’s hand pulling the arrow out of his eye socket. The enemy archer opposite him is still holding the bow in front of him with his right hand pulling back as if he had just released the lethal arrow. In the 14th-century popular historical novel Romance of the Three Kingdoms (三国演义), Xiahou had no sooner swallowed his eyeball than he charged at the archer and sent his spear into his face.

A comparable artistic treatment of such a spine-chilling spectacle is found on the David d’Angers’ marble statue of Wounded Philopoemen in the Louvre. Philopoemen, reputed as the ‘last of the Greeks’, was a brilliant general of the Greek army. When his thigh was pierced by an enemy javelin during the Battle of Sellasia, he stoically pulled broken section out on the spot.

A woodblock printed book illustration made in the Qing dynasty shows an epitomic example of this horrendous event with Xiahou thrusting his eyeball into his mouth as if it were a candy haw. For the illustrator, Xiahou’s characteristic act is everything, whether Xiahou is mounted or surrounded by enemy becomes irrelevant.

Artists often try to avoid representing people who have lost one eye in a direct manner, as is the case of the 16th-century engraving of Horatius Cocles illustrating this article. A usual practice in the West is to cover the empty eye socket with a one-eyed mask often associated with pirates, as are shown in the three contemporary posters for online games. Either way, the maimed face is regarded as something undesirable albeit there is an occasional alluring pirate halo. However, a 19th-century Chinese graphic designer has left us with a genius rendering of Xiahou Dun’s face as a Peking opera character mask. The usually symmetric features on Peking opera masks are cleverly maneuvered in this particular case to maintain an aesthetically pleasing design while an eyeball is discreetly moved to the upper corner of the right eye, indicating the mutilation.