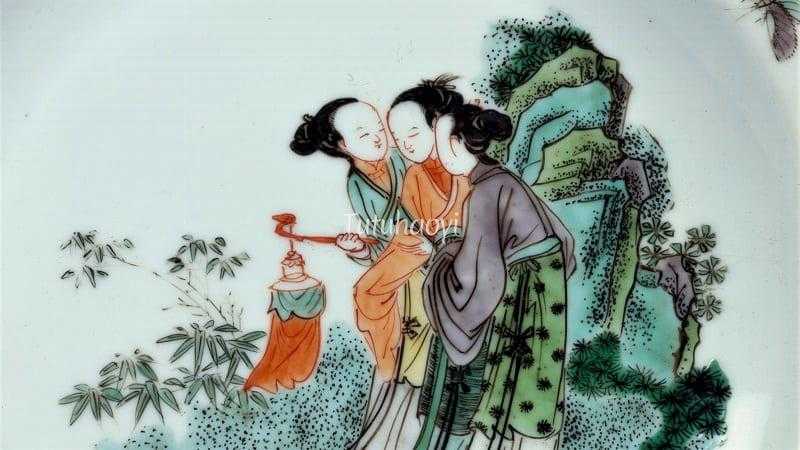 Editor: ‘Imperial Consort Lady Yang Getting Drunk’ has been a popular Chinese story plot since the seventeenth century. Even now, it is still one of the best-known classic Peking opera episodes. However, many renowned museums are still not able to identify this story scene on the porcelains in their collection. Dr Yibin Ni will illustrate with a few examples here.

image above: porcelain dish with overglaze enamelled decoration (detail), Kangxi period (1662–1722), courtesy of The Trustees of the British Museum

The play Polishing the Dust-covered Mirror (磨尘鉴 Mo Chen Jian) was compiled in 1619 by an obscure playwright Niu Ge (钮格), according to some twentieth-century researchers, including the eminent scholar of the field Zheng Zhenduo (郑振铎 1898–1958). The play portrays some colourful historical figures of the Tang dynasty (618–907) such as Emperor Xuanzong of Tang 唐玄宗 (name: 李隆基 Li Longji 685–762) and his famous consort Lady Yang Yuhuan (杨玉环 719–56), one of the Four Great Classic Beauties in Ancient China.

In Act 12, entitled ‘The Tipsy Consort (醉妃 Zui Fei)’, Lady Yang is drowning her disappointment in alcohol when the emperor fails to turn up at the Hundred Flowers Pavilion (百花亭), where they are supposed to meet that evening. Lady Yang spends her lonely night by abusing her attendant eunuchs and losing herself in intoxication. Eventually, Lady Yang staggers back to her own quarters swaying back and forth with her maids’ support.

There are two typical scenes of the play extant on Chinese antique porcelain. One with the eunuch and one without. Unfortunately, neither of them has been recognised by renowned museums, such as the British Museum, the Victoria and Albert Museum, The Royal Ontario Museum, and the Fitzwilliam Museum, the University of Cambridge.

Later, this famous plot was refined to become ‘Imperial Consort Yang Getting Drunk (贵妃醉酒 Guifei Zuijiu)’, one of the best-known classic Peking opera episodes. It is a showpiece for the female lead roles (旦 dan) and was best represented by Mei Lanfang (梅兰芳 1894–1961), one of the few Peking opera artists known to the West.

Interestingly, this modern Peking opera piece is said to have been originated directly from some local opera popular during the Qianlong reign (1736–95) of the Qing dynasty. My findings of the images above, were all crafted before the Qianlong period. Therefore, they cannot be regarded as story scenes reflecting the famous Peking opera piece. Despite of this disparity, there are still some marvelous artifacts created during and after Qianlong period, including the porcelain dish below, which the Rijksmuseum has not been able to decipher either.