Not Just Common Motifs of Creatures: The Five Supernatural Beasts 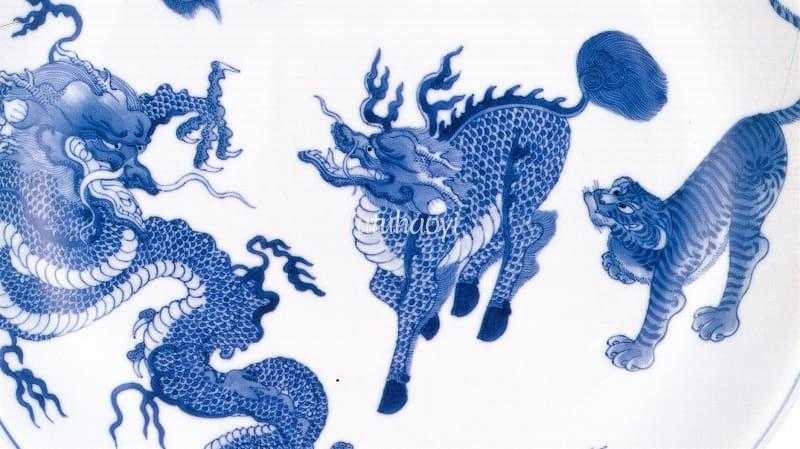 Editor: Dragon and phoenix are commonly seen motifs in Chinese visual culture. Tiger, qilin and tortoise, at the same time, are favoured creatures symbolic for auspice. But when the motifs of the above five beasts are combined together, they have more meanings than they do individually. Here is what Dr Yibin Ni has to say about the origin and development of the motif combination of these five supernatural beasts.

Du Yu 杜预 (222–285), a third-century Confucian scholar, annotated the ancient Chinese chronicle Spring and Autumn Annals (春秋 Chunqiu) with The Commentary of Zuo (左传 Zuo zhuan), a collection of historical events ranging from 722 to 468 BCE. In his preface to his new book (杜预《春秋左氏传》序), Du Yu noted, ‘The “Five Supernatural Beasts (五灵 wu ling)” including the qilin unicorn and the feng phoenix are good omens for the king and the powerful (麒凤五灵，王者之嘉瑞也)’.

Kong Yingda (孔颖达 574–648), a later commentator of Du Yu’s book, matched each member of this group to Wuxing (五行), or a fivefold conceptual scheme in Chinese philosophy, and five directions (including the starting point: the middle), following the Han-dynasty (206 BCE – 220 CE) tradition: long-dragon for the east and wood, feng-phoenix for the south and fire, qilin for the middle and earth, white tiger for the west and metal, and divine tortoise for the north and water. Kong Yingda’s book, Correct Meaning of The Commentary of Zuo (左传正义 Zuo zhuan zhengyi) was adopted as the standard textbook for the civil-service examinations in China for nearly a millennium and remained to be the basis for all following scholarly commentaries of the classic Spring and Autumn Annals and The Commentary of Zuo.

There is another example of the same theme survived on a Kangxi (康熙 1662–1722) porcelain dish with underglaze blue decoration in the collection of the Palace Museum, Beijing. However, when the image was published as Plate 89 in Blue-and-White Porcelains of the Shunzhi and Kangxi Reigns of the Qing Dynasty (清顺治康熙朝青花瓷), this classic subject matter was not recognised. The comment on the image in the book says, ‘Dragons and phoenixes are common motifs on porcelains in the Qing dynasty. However, it is very rare to see them in the company of the auspicious creatures qilin, tiger, and tortoise’.