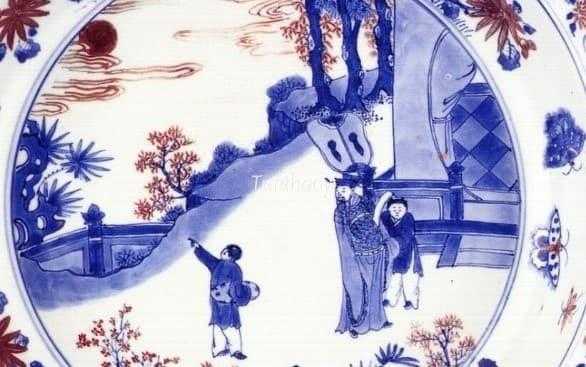 Editor: In Chinese porcelain painting, it can be tricky to interpret a round disc in the sky as a sun or a moon. Knowledge of Chinese culture and pun rebuses are the keys to explain the meanings of the motifs and scenes correctly. Dr Yibin Ni will give you some examples here.

The action of ‘pointing to the sun’ is termed in Chinese as ‘指日 zhi ri’, which sounds and looks exactly the same as (both homophone and homograph of) the phrase ‘指日 zhi ri’ meaning ‘in a few days’ time’. The state of “something rising high up” is ‘高升 gao sheng’ in Chinese, which may be metaphorically used to mean ‘getting a promotion’. Thus, the image of a person pointing to the sun high up in the sky visually cues the congratulatory saying ‘zhi ri gao sheng 指日高升 May your chance of promotion be just round the corner’.

Essai sur l’architecture chinoise (Essay on Chinese Architecture), an illustrated manual composed by an anonymous 18th-century French missionary, contains an example of a spirit screen (照壁 zhao bi), on which the pun rebus was supposed to bless the master of the house where it is situated.

However, this pun rebus is a seemingly natural scene and thus is frequently met with blind eye. For example, it was simply labelled ‘figures in a landscape’ by curators in the Hermitage, St. Petersburg, Russia (see above).

More often, the round disc is interpreted as the ‘moon’, as Daisy Lion-Goldschmidt did in her ‘Ming Porcelain’ and Rosemary Scott did in two of her books, which would, therefore, lead the viewer on a wrong track (see below).

Reference: Rosemary E. Scott. Elegant Form and Harmonious Decoration: Four Dynasties of Jingdezhen Porcelain. California: Percival David Foundation of Chinese Art. 1992: “accompanied by two attendants, one of whom is pointing to the moon”

Reference: Rosemary E. Scott. For the Imperial Court: Qing Porcelain from the Percival David Foundation of Chinese Art. New York: American Federation of Arts. 1997, p. 72 “the other (attendant) … points to the moon emerging from behind clouds”

In fact, the disc appearing in the sky on Chinese porcelain is usually the Sun, unless it is accompanied by constellations, which is a formation of dots and connecting lines, as shown on the comparing dish and the transitional jar (see below).

Occasionally, the auspicious idiom would be taken too literally, as is found in the translation in a Christie’s sales catalogue, where ‘指日 zhi ri’ was rendered as ‘like the sun’.

As the above examples show, deciphering the culture-specific meaning of traditional Chinese motifs and, in particular, pun rebuses requires knowledge of a true specialist and blunders are not to be overlooked.