Why is the scene of a man holding a shoe popular in Chinese antique artworks? 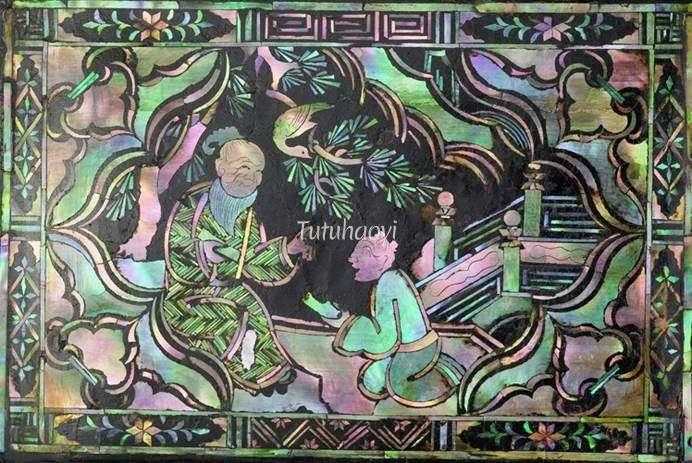 Editor: Do you notice that a young man in the above image is kneeling down in front of an old man and holding a shoe in his hand? In fact, there are many similar images in Chinese antique decorative artworks depicting such scenes. Are you intrigued by the story behind scene? Let’s have Dr Yibin Ni decipher it for you.

About the scene on a transitional porcelain bowl, shown as above, Daisy Lion-Goldschmidt’s Ming Porcelain says: ‘Under a gateway marked shih ch’iao (bridge of worship), an aged scholar is seated with a disciple facing him.’  The author didn’t spot that ‘shih ch’iao 祀桥’ should have been ‘yi qiao 圯桥’, the Yi Bridge, nor did the author was aware of one key attribute that the young man is holding, a shoe. The story is about how Zhang Liang (张良, d. 189 BCE) won the trust of his mentor and thus came to learn the state of the art of a strategist.

After his failed attempt to assassinate the first emperor of China (reigned 211-210 BCE), Zhang Liang, an ambitious young man, changed his name and went into hiding, when he ran into Lord Yellowstone (黄石公, Huang Shigong), a guru strategist by the Yi Bridge. The old man could see Zhang’s great potential but he wanted to put him through a series of tests before taking him as his pupil.

Lord Yellowstone deliberately dropped his shoe down the embankment and asked Zhang to fetch it and put it back onto his foot. Stomaching his resentment, Zhang meekly did what he was told to do. And then, Lord Yellowstone twice made early-morning appointments with him but cancelled them because Zhang arrived later than he did. The third time Zhang arrived at midnight way ahead of the designated time and his humility and perseverance impressed the old man, who then passed on to him the ancient wisdoms and art of war. Later, Zhang helped the founder of the Han dynasty, Liu Bang (d. 195 BCE), with the invincible strategies and became one of Liu’s three top lieutenants.

This story is also popular in Japan and here is a Japanese version of the story scene (see below).